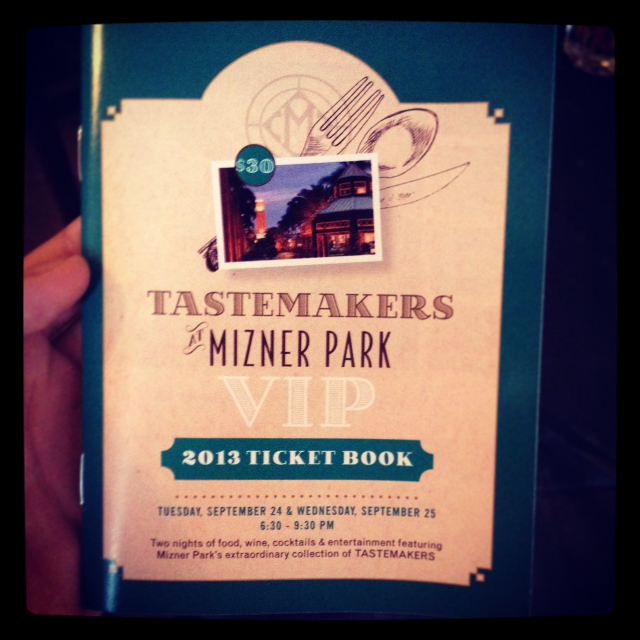 Happy Thursday everyone!
This is another long one, but worth the read, I promise!
This past week a local plaza called Mizner Park held a two-night food and beverage tasting event called “Tastemakers at Mizner Park”, benefiting Hospice by the Sea.  This event has also been held in Delray Beach for several years.

The deal is you get a little passport-type booklet ($30 per booklet) and walk around Mizner Park grabbing a taste’s worth plate and a cocktail.  9 Restaurants featured dishes, and here I am to briefly talk about a couple of them.  I was lucky enough to score some tickets from my friend, and I could not thank her enough.  Getting CaptivEATing out there has been fun, and this was certainly an enjoyable event, so thanks Steph!!
Mizner Park has a few good spots, some of which I’m very familiar with actually.
Kapow!, Dubliner and Tanzy are a few of my personal favorites.  Yardhouse is in there too, but they weren’t featured in the Tastemakers, and Racks is another one that’s up there for me inside of Mizner.  Tried somewhere new also, called Jazziz Nightlife, which was awesome.

So! Where was the first stop?  The Dubliner.  The Dubliner is an Irish pub which serves “Irish inspired Cuisine”. 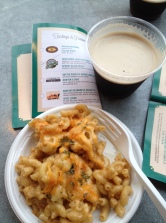 They were offering their Shepard’s Pie and Guinness Mac and Cheese, paired with “Special Black Velvet” (Guinness and cider).
I mean, just look at the picture…! The Mac and Cheese is one of my favorites around here and one of the best you’ll find.  The bitterness of the Guinness goes so well with the cheese.  And they usually serve it in an iron skillet, so its piping hot.  MMM!
The Shepard’s Pie here is also really good, although I didn’t try it while at the event.
I think the Special Black Velvet went well with the Mac but maybe a straight up Guinness would have paired even better.  The cider’s acidity threw me off at the beginning of the sip, my palette was like, ‘Whoa?’ Might just be personal preference.
Either way, The Dubliner has other fantastic dishes and a great atmosphere, worth checking out.
Next stop was Kapow! Noodle Bar, another one of my ultimate favorites.
They have a lot of good dishes and drinks there.  They use a lot of spices and herbs in their drinks like lavendar, rosemary, basil… Excellent. 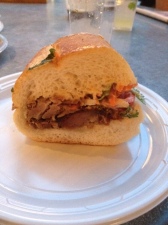 (Not the best photo, apologies.)
What they had out was their Banh Mi Vietnamese Baguette and a Spicy Lover cocktail.
I could see how the baguette was made because the bread was split and aioli was spread on both sides, then I saw the chef add slow cooked pulled pork, pickled carrots, daikon, jalapeno and cilantro.  Holy spicy, is all I have to say.  My friend and I took a bite and our mouths were on fire, but I think the cause of that was the way the jalapenos were spread out, or weren’t.. Honestly the spice didn’t linger for too long but the initial impact it had was intense!  The cocktail was also a spicy one so it didn’t soothe the palette too much, but it was tasty.  The Spicy Lover consists of: Partida Reposado Tequila, cucumber, lime juice, Tabasco green sauce, organic agave nectar and some cilantro as garnish.  SO GOOD.  One of my favorite drinks they have there (in the picture the sample is all the way in the back, I had already finished mine, whoops).
Anyways, their Buns on the menu are good, as well as their Pad Thai and fried rice.  Another mention definitely worth sharing!
The new place I tried was Jazziz Nightlife.
It’s a restaurant which has an incredible stage set up in the middle of it, where they have Jazz nights as well as a cigar bar and indoor/outdoor lounge areas.

It had a really cool atmosphere and the sample of their Butter Poached Maine Lobster and gin cocktail was really delicious.  The only thing was that it was served over a Kobocha squash risotto which doesn’t stay hot for very long, so mine was cold, making the texture of the risotto not as creamy and smooth as when it is hot.  Flavor wise though, it was incredible.  The risotto didn’t overpower the lobster, it made the flavor of the lobster pop.  Mouthwatering Maine lobster on top of risotto? Sign me up, anytime.
The drink they were giving samples of was called “Newton’s Cure” which was comprised of barrel-aged gin, honeycrisp shrub –  a kind of apple cider with vinegar combination I believe the bartender told me – local honey, and Prossecco.  Did I already say how delicious the cocktail was?  My lordy.  The smoothness of the barrel-aged gin with the crisp taste of the apple and the fizziness, along with the thyme it was garnished with made it a phenomenal drink.
And last but most certainly not least, is Tanzy.
Tanzy is located underneath the iPic Theater, and also has an awesome atmosphere.  Not just an awesome atmosphere but awesome food.  I’ve had dinner there a couple of times and each time has been a wonderful experience so I highly recommend it for those of you have the chance to go.  The staff is friendly and each time I have gone the server has been extremely welcoming.

Chef Jacob was kind enough to explain what they were offering for their pairing, and it was: Housemade Meatball and Garlic Crostinis (his Grandmother’s meatball recipe) as well as a Four Cheese Fiocchi, with the accompaniment of a Pineapple Mint Illegalito Mojito Italiano.  The drink, put simply was if a Pina Colada and a Mojito had a baby.  It was pretty good.  Super sweet, even a little too sweet for my taste, but it was made of housemade passion fruit puree, fresh mint and basil, housemade coriander syrup and hand-crafted Boca Loca (hand-crafted, all natural Brazilian Rum), so just imagine how sweet it was.
The bites of the meatball and the crostini, as well as the fiocchi I have to say were in the top of the flavor and taste pool for the night.  The meatball was made of pork, beef and veal, which I personally think creates a larger flavor profile for the meatball and just gives it a more wholesome taste.  They’re slow roasted in their signature passata di pomodoro sauce and topped with whipped ricotta.  Are you drooling yet?   I could seriously eat this stuff forever..!

There were a few more places we went to, like Villagio, Max’s Grille and The Cheese Course.  Villagio, I’m sorry to say, has never given me the Italian food experience I crave when I do go out to eat Italian food.  The two times I ate there left me unsatisfied and as much as I want to love everywhere I go, I must talk about the places I do not get captivated by because it’s part of the process!  This is CaptivEATing, after all..!  I have heard mixed reviews about personal experiences there, but my own have not been the best.  I’ll give it another shot, but three strikes, and you’re out!
The Tastemakers at Mizner Park was really fun to be a part of and being able to sample some dishes I hadn’t tried at a few of these places broadened horizons, and that my friends, is the true reason for CaptivEATing… To Capture the Deliciousness of Life.

On that note, happy eating and have a happy weekend!