Well, well, well… Who would have thought the best sushi I’ve had in the US in a long time would come from CLEVELAND, OHIO?! – Tremont is the actual town Ginko is located in, which is just outside of Cleveland.

This restaurant is one of five that Chef Dante Boccuzzi opened up in Ohio. I got the chance to go to this one, and Dante (Mm, mm, mm!) which unfortunately wasn’t photographed, but that’ll be for my next trip over there.
I have to thank the one who brought me over to Ginko before we get started because it was, dare I say, Life Changing. 🙂

From the second we walked down steps to get to this large, majestic looking door, to the moment we walked in, it gave a good feeling.

We took a seat at the bar instead of one of the cozy booths that were tucked in the corners of the restaurant because we wanted to be right up there with Chef Taishi Noma. (Had to take a panoramic of the place, the framing is a little odd with this one, sorry about that!)

We ordered some unfiltered sake and a beer to begin our Ginko adventure, as well as this Monkfish Liver (Ankimo) I had heard all about. Luckily they had it the night we went because its not a 100% of the time thing. 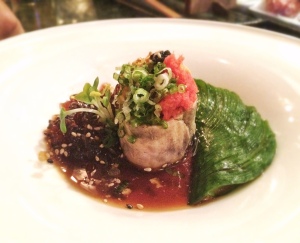 That was one of the best parts of the restaurant: everything is so fresh and of such good quality (all flown in from the Tskiji Fish Market!!) that if it ISN’T up to par, they won’t fly it in. That, is a good sign.

That liver though… One of the tastiest, most delightful things that has touched my palette. The texture was perfectly smooth, not one bit of a fishy taste, more-so like the traditional fois gras flavor. Like I said, just delightful. Can’t forget the Uni and masago that were on top, or what I believe to have been a miso glaze.. Each component of the dish went perfectly with the other. And that was only round number one.

After the appeteaser, we got the mother-load. Holy, Sushi.

13 different kinds of fish, which I will list for you right here! (2-4 pieces each)

Best, sashimi, yet – and there has been a lot of sushi in this belly.
But Emily, what was the best thing you had that night?
Honestly, my favorites of the night, fish-wise were: uni, madai, shiro maguro, and the hotate. 🙂

After we were all done with the sweet shrimp and the mackerel, they took the heads of each and deep fried them. You’re supposed to eat the entire thing, of both creatures. Did i? You bet your butt I did. Maybe almost against my own will – not really, but not my favorite thing!! Eating fish heads and what not.. However, it was one of the best parts of the meal.

The deep fried goodness came with a green tea salt which the shrimp and fish were to be dipped in, making it a little saltier and giving even more depth to the flavors.

No dessert for us as we were extremely satisified, and still had a Chris Robinson show to go to! No food coma’s allowed that night although I was ready to be rolled out either way!!!

This restaurant was awesome, the service was great, and Chef knows what’s up.
Get to Ginko in Tremont, OH, if you ever get the chance. You will not be disappointed my friends.